Rhodonite with veins of black manganese “Section Carving”.  “Section Carving” is a complex and difficult art to master. Defined as carving both the base and the subject from the same stone in one piece, the master carver must know not only carving techniques, but also the intricacies of the stone. Some inclusions or fault may not be visible until the carving is underway. The carver must then be prepared to alter the design immediately. Usually a sketch is drawn before the carving is begun, with alternate drawings to refer to should unexpected weak spots appear. While it takes eight to ten years to become a master carver, another three years or more are required to become proficient in section carving.

This pod of dolphins happily frolicks in ocean waves.  A beautiful, one of a kind creation!

Rhodonite is a pink manganese silicate of variable composition that often contains iron, magnesium, and calcium. Its general chemical composition is (Mn,Fe,Mg,Ca)SiO3. Rhodonite is associated with black manganese oxides which often occur within the specimen. It rates a 5.5 – 6 on the Mohs Hardness Scale. It is mined in Australia, Brazil, Canada, England, Peru, Sweden, and the Ural Mountains in Russia. In the United States it has been found in North Carolina, Colorado, New Jersey, and has been named as the state gem of Massachusetts.  Rhodonite is believed to be a stone for activating love energies. It is also said to raise self-worth and give an aura of elegance, self-confidence and self-esteem. Some believe that wearing it will stimulate and open the heart chakra and dispel anxiety. It also said to balances yin and yang and soothe nightmares. 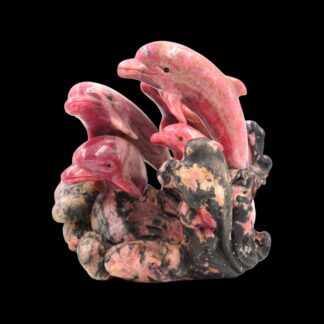