This pink to rose-red mineral, an ore of manganese, is mined almost exclusively in Capillitas, a remote Andean region of Argentina. The mine, uncovered in 1938 by explorer Franz Manfiel, held the tomb of an Inca mummy holding an amulet of rhodocrosite. The Incas, while working this mine for copper and silver in the 13th century, had discovered the stone that came to be known as the “Inca Rose.” They believed that the blood of their rulers had turned to stone. In the 700 year interval, while the mine lay idle, rhodocrosite occurred as stalactitic formations, identified by the circular pattern in the stone. Crystals are very rare and usually small. Rhodocrosite is known as a body harmonizer and works best over the solar plexis, freeing the flow of energy throughout the body. 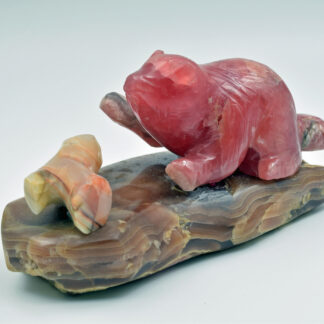