A perfect pairing of South African tiger’s eye on top, and Namibian pietersite on the bottom.  These two African beauties are bezel set in sterling silver. From our very own Geoclassics jewelry line!

TIGER’S EYE is one of a small group of silicates which, when appropriately cut, reflect shimmering, golden bands of light. This quality, known as chatoyancy (French for cat’s eye), is produced when light is reflected from tiny, fibrous inclusions oriented in parallel within the stone. Iron oxide gives Tiger’s Eye its golden brown color, while Cat’s Eye is greenish-gray, Hawk’s Eye is blue-gray, and Bull’s Eye is mahogany. Tiger’s eye is found primarily in South Africa, but also in Australia, Burma and California. Though all of the cat’s eye stones are said to enhance perception, Tiger’s Eye is particularly useful for bringing mind and body into balance, creating an overall sense of well being.

PIETERSITE, a member of the quartz family, forms in masses which are pseudomorphic jasper inclusions after asbestos. It has a hardness of 7 and is characterized by a dramatic chatoyancy (cat’s eye effect), with contrasting colors of gold, brown, blue, gray, and black, as well areas of clear quartz. Pietersite is said to enhance clarity of thought and encourage intuitive leaps. It it also said to activate the imagination, stimulate psychic vision, and enhance telepathy. First discovered in Namibia, South Africa in 1962 by Namibian mineralogist Sid Pieters, this stone is also found in China. 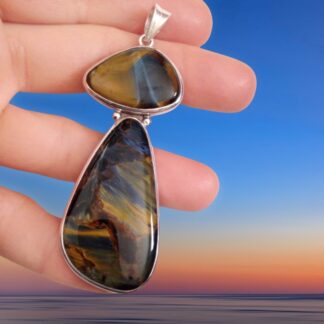 You're viewing: Tiger’s Eye and Pietersite Pendant $215.00
Add to cart