AGATES and JASPERS are cryptocrystalline (microscopic crystals) varieties of quartz which occur throughout the world. Changes in the chemical conditions during crystallization cause the beautiful banding and colorations which make them so appealing. Agates are a banded, translucent variety, often named for their location or appearance, i.e. Laguna, Lace, and Fire Agate. Dendritic and moss agates are characterized by branching inclusions. Jaspers are a brightly colored, opaque variety with such colorful names as Picture and Leopard Jasper. Throughout history, agates and jaspers have been worn or carried to promote good health.  It is also thought that these wonderful stones bring success in love and friendship. 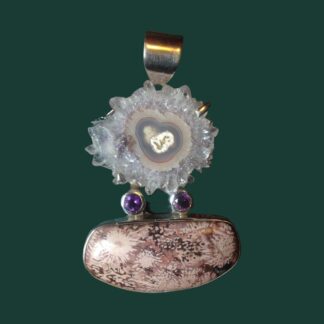