Fossilized ammonite (split and polished half) ring by the magical, mystical Momo of Mercurious Designs!

AMMONITES-Some 350 million years ago, these relatives of the modern chambered nautilus shell flourished in warm, shallow seas. When great droughts led to their extinction about 65 million years ago, they were buried by layers of sediment from land erosions. It took many years for the shells of these ammonites to fossilize, a process by which the original shell material was replaced by the minerals in the sediment that buried them. While some of the earliest ammonites resembled long, straight chambered cones, most of them were coiled discs with complex patterns of ridges and suture lines. The suture pattern, important to species identification, shows where the inner chamber walls meet the outer shell. The animal that once lived in this shell resided near the entrance in the largest chamber. 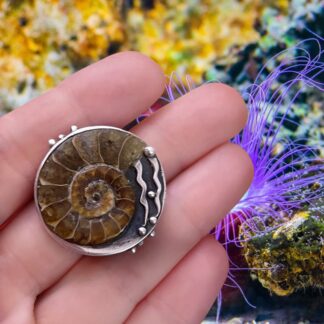