Ooh!  ONE faceted citrine…plus ONE naturally double terminated quartz point loaded with black tourmaline…. plus ONE faceted dendritic quartz (dendrites are are fern-like inclusions of iron, manganese, or other metallic oxides that grow in a fractal pattern)… equals ONE amazing, one-of-a-kind, sterling silver pendant!  Stones are all from Brazil.  Pendant is made in Bali, Indonesia.  From our very own Geoclassics jewelry line!

CITRINE ~ Often mistaken for topaz, citrine is a variety of quartz found mostly in Brazil. Its name comes from the French word for “lemon,” a reference to its soft yellow to golden-brown color which is caused by ferric iron. The discovery in Brazil in 1979 of a unique deposit of citrine in conjunction with amethyst resulted in a new gemstone called ametrine. Though they are sister quartzes, the cause of their combined occurrence is still a mystery. As a healing stone, citrine is associated with relaxation of mind and body and can be helpful to the digestive system.

TOURMALINE, a boron aluminum silicate, is perhaps the most fascinating of all gems. The diversity of its colors, the complexity of its composition, and the wonders of its physical properties are unmatched by any other gemstone. It comes in virtually every color, sometimes with several in the same crystal. The many varieties of tourmaline have been categorized into 6 major species: uvite, schorl, elbaite, liddicoatite, buergerite and dravite. Generally, only the elbaite and liddicoatite, which contain lithium, occur in rainbow colors, including the popular red-green combination aptly nicknamed “watermelon”. Tourmaline exhibits both pyroelectric (static electric) and piezoelectric properties. The latter makes it useful as a frequency stabilizer, a property it shares with quartz. As its powerful healing energies continue to unfold, tourmaline is emerging as one of the most important healing stones of the new age. Major deposits have been found in Brazil, Afghanistan, California and Maine, and Elba, Italy. 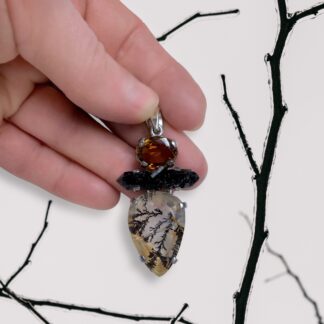