With the most fabulous Uruguayan amethyst/quartz/agate stalactite slice, complimented by an amethyst/quartz crystal from Vera Cruz, Mexico and a clean and clear quartz with fuchsite phantom crystal from Madagascar,  this magnificent, one of a kind sterling silver pendant couldn’t possibly be any more beautiful!  From our very own Geoclassics jewelry line!

FUCHSITE, also known as chrome mica, is a chromium rich variety of the mineral muscovite, belonging to the mica group of phyllosilicate minerals.  It is said that this stone can help with insomnia and ease emotional shock. It is also thought that it can strengthen one’s sense of self-respect and help to calm excess energies in the body. 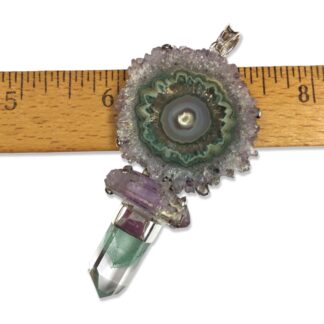