Amazonite is a tectosilicate mineral with the chemical formula KAlSi3O8.  It is the green/blue-green variety of the potassium feldspar called microcline.  It is named after the Amazon River, from which green stones were found, although it is unknown whether those stones were actually amazonite!   What causes the color of amazonite is a bit of a mystery.  Although it was originally assumed that its green color was due to the presence of copper, a 1985 study suggests that it a result of quantities of lead and water in the feldspar. Other studies suggest the colors are associated with the increasing content of lead, rubidium, and thallium in the feldspars, with even extremely high contents of lead monoxide.  A study in  2010 implicated the role of divalent (a metal whose atoms are each capable of chemically combining with two atoms of hydrogen) iron in its coloration.  Amazonite occurs in Brazil, China, Lybia, Madagascar, Mongolia, Russia, South Africa, and the United States.

Amazonite is thought to have a wide variety of metaphysical and healing abilities.  It is thought to have a soothing effect on the nervous system. Metaphysical healers use it treat fatigue, trauma, and other energy draining woes. It is said to bestow truth, honor and integrity to its wearer. Since this stone is associated with the throat and heart, it is best when worn as a necklace near these areas. 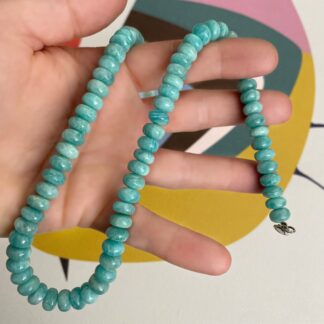