Rose quartz rooster and amethyst hen.  Both with carnelian agate wattles and combs and rhodolite garnet eyes.  The rose quartz rooster has a yellow agate beak ,  the amethyst hen has a carnelian agate beak.  These beautiful birds are standing on a Brazilian quartz with tourmaline and albite specimen.  Birds are removable. A Peter Muller creation, hand carved in Brazil.

Rose quartz, the pink member of the quartz family, usually occurs in massive form, but occasionally grows in small clusters of prismatic crystals. It is most often opaque or translucent and in some specimens, trace inclusions of rutile can cause reflections of six pointed stars. Rose quartz is considered the quintessential stone of love: for one’s self, life partner, children, family, friends, community, the earth, the universe, and the divine. It is believed to calm the mind, assisting in the release of worry, fear, and anxiety. Most rose quartz is mined in Brazil and Madagascar.

Amethyst -These purple quartz crystals are most often seen in the form of cut gemstones, as amethyst is February’s birthstone. Its lavender to deep purple color is due to the presence of iron. As a healing stone it is known as the “gem of transformation”, a powerful energizer which can be used to bring about physical, emotional and spiritual change. Its history dates back to the ancient Greeks who used it not only to cure intoxication, but also to clear the head, sharpen the intellect, and render its users shrewd in business matters. 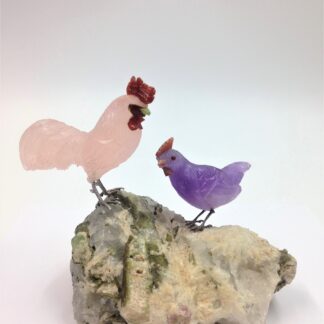