HYRACODON (Greek: hyrax (hyrak = ‘shrewmouse’) teeth (odontos)) is an extinct genus of mammal of the family Hyracodontidae known as the “running rhinoceroses”. They are of the order Perissodactyla, the “odd-toe” mammals. Thy were small, light chested, swift footed, hornless creatures, with a short broad snout. Hyracodon’s dentition resembled that of later rhinoceroses, but it was a much smaller animal and its appearance closely resembled that of the primitive horses of which it was a contemporary. They measured about 5 feet long overall, with skulls large in comparison to the rest of their bodies (about 12 inches). Their legs were long and slim, with three toes on both the fore and hind legs, pointing to a running life-style. They had grinding molars and premolars and were predominantly grass eaters. Like the primitive horses, hyracodonts inhabited open forests and wooded steppes and turned from browsing foliage to grazing grass. This small, fast-running creature was a close relative of the largest land mammal that ever lived, the 20-ton Paraceratherium of Asia. They died out without leaving any descendants and they mark the end of the phylogenetic branch of hornless, running rhinoceroses. They flourished during the middle Eocene to late Oligocene. 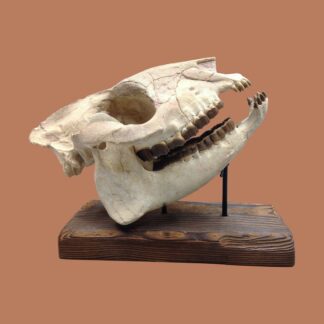