ACTINOLITE is an amphibole silicate mineral with the chemical formula Ca2(Mg4.5-2.5Fe0.5-2.5)Si8O22OH2.  It crystallizes in the form of long blades or a skinny needle-like structures. This crystal is mainly found in its distinct dark green color, but can also be seen as white, yellow, grey or black. Actinolite is said to balance body, mind and spirit, enhancing higher awareness.  It is believed that it can offer psychic protection, strengthen the edge of ones energy field, and allow the expansion  of ones aura.  If you’d like to set an intention to release unwanted aspects of yourself,  actinolite it thought to help smooth the process of letting go. 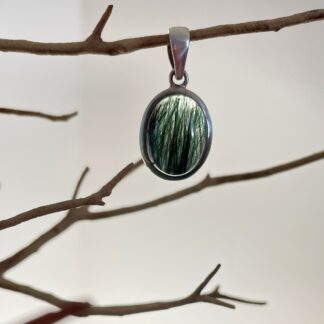 You're viewing: Quartz with Actinolite Pendant $48.00
Add to cart