Finely carved amber Guanyin, set in sterling silver.    This Baltic beauty is hand carved in China.  From our very own Geoclassics jewerly line!

Guanyin (also known as Guan Yin or Kuan Yin) is the Buddhist bodhisattva (in Buddhism, a bodhisattva is any person who is on the path towards Buddhahood) associated with compassion. She was first given the title of “goddess of mercy” by Jesuit missionaries in China. The Chinese name Guanyin is short for Guanshiyin, which means “[The One Who] Perceives the Sounds of the World”. She is an all-seeing, all-hearing being who is called upon by worshipers in times of uncertainty, despair, and fear. Guanyin is often referred to as the “most widely beloved Buddhist Divinity”, with miraculous powers to assist all those who pray to her, as is said in the Lotus Sutra and Kāraṇḍavyūha Sūtra. 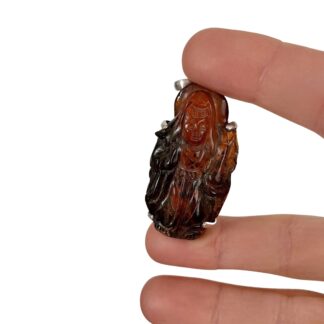