Ammolite originates from the crushed, layered, and fossilized remains of ammonite shells. Ammonites were hard-shelled, squid-like marine animals that existed in the Devonian and Cretaceous periods. The ammonites found in the Bearpaw shale formation in Alberta, Canada, were left behind when the inland sea receded. Layer upon layer of shells were covered with silt and volcanic ash, then crushed and compacted together. This prehistoric debris was then exposed to eons of elemental movement, intense heat, and tectonic pressure, emerging 71 million years later as Ammolite. 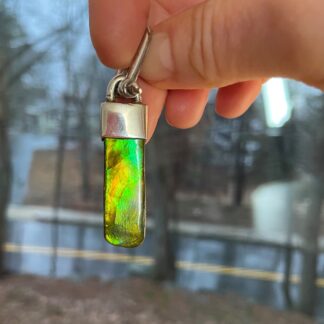